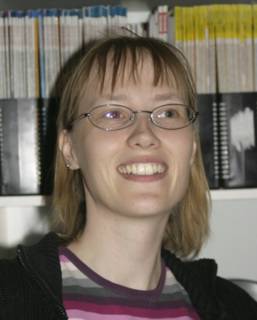 The top five stories in the competition were:
(Photo by Tomi)
at December 16, 2004 No comments:
Email ThisBlogThis!Share to TwitterShare to FacebookShare to Pinterest

Making Your Own Fandom, Part Three 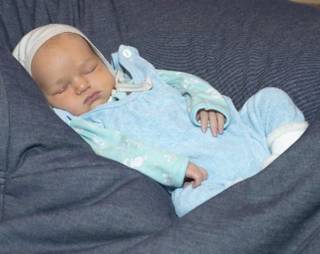 The latest addition to the valiant effort by the Turku fandom to have a home-grown new generation in twenty years (so the current board of the society can finally retire) is Ronja Saario. She’s over a month already—I think someone somewhere must have pressed the universe’s “fast forward” button once too often.
(Photo by Tomi) 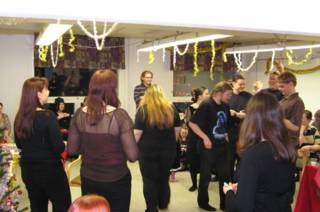 We had the traditional TSFS Christmas party last night, with maybe around two or three dozen local fen and a couple of visitors from Helsinki present. It was held at the club house of the Tenants’ Association in the Student Village, which is usually a bit sterile and boring for a party, but this time the organizers had managed to light and decorate the place really well, so it was quite cozy. 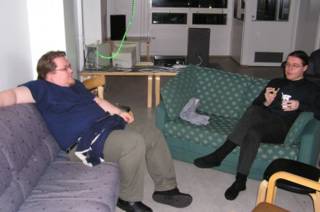 There was traditional Christmas food (not tired of ham and casseroles yet, so it tasted delicious) and some program, but not too much: a raffle and a quiz. I spent most of the evening sitting on a sofa, talking with Jukka and Ben about all things sf (and other), most definitely including the coming Worldcon and Finncon, but also how to win any conversation—much like besting the other bands by having an amp that goes to eleven—and some other thing we all noted must be remembered afterwards, which I have forgotten. Nobody got around to the dancing, so the stereo played good music at a reasonable volume that didn’t make you shout to be heard. 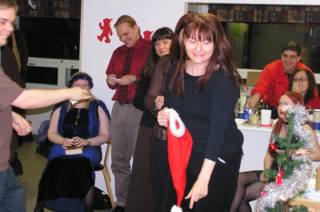 The raffle was fixed, as always. Around half of the prizes went to the spouse of the one drawing the tickets out of the hat, and the others were dealt evenly to the members of the board. Or maybe it’s just that they bought most of the tickets… 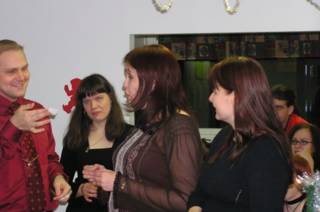 The quiz was fun, too, although the jury seemed to summarily disqualify most of me and Jukka’s (correct) answers for no reason at all. (—Who names the starships in Iain M. Banks’s Culture novels? —Iain M. Banks. —Who built the gates of Moria? —The set design crew of Peter Jackson’s, etc.) All in all, I had a very good time. A big hand for the organizers!
at December 05, 2004 No comments:
Email ThisBlogThis!Share to TwitterShare to FacebookShare to Pinterest

There was another nice mafia evening tonight. People were coming and going a bit, but I think we had this year’s attendance record: the guest book had 15 signatures at the end of the night. The usual crowd was present; a couple of older faces not seen in the fandom circles for a while also stopped by. After most of the folks had left, the few that were left wandered away from science fiction and had quite a heated debate mainly about semantics of language. Well, actually, we didn’t get very far because we couldn’t agree on the terms. But anyway, it was fun.

’Tis the season again, and Christmas parties are here. This Saturday is the Christmas party of TSFS. If you happen to be in the neighborhood, come by to have a good time with a lot of food, music, sf-themed programs and dancing, with a crowd of local sf fen. If you are in Helsinki, there is Ye Olde Smalle Yule Partie by HYSFK on Sunday. I hear a black hat and moustache are the outfit du jour.

On an un-Christmas-related note, there is a Buffy the Vampire Slayer themed meeting at Terrakoti next week’s Thursday (by TSFS). Head there, if you feel like sinking your teeth into Buffy instead of the Christmas ham.