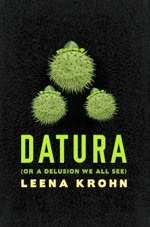 Paul Di Filippo reviews two new Finnish publications from Cheeky Frawg, The Explorer and Other Stories by Jyrki Vainonen and Datura or A Delusion We All See by Leena Krohn, for Locus and quite likes them.

at December 17, 2013 No comments:
Email ThisBlogThis!Share to TwitterShare to FacebookShare to Pinterest
Labels: finnish sf

It Came From The North 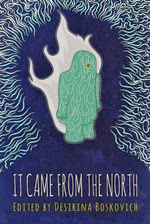 This has been a long time coming*, but it’s finally here. It Came From the North: An Anthology of Finnish Speculative Fiction, edited by Desirina Boskovich and published by Cheeky Frawg. I’m very happy about how the anthology turned out: this is an excellent sampler of recent fantastic fiction from Finland. There are 13 short stories in the anthology (from such authors as Hannu Rajaniemi, Anne Leinonen, Pasi Ilmari Jääskeläinen, Leena Likitalo, Maarit Verronen, Tiina Raevaara, and Jyrki Vainonen, among others) plus two excerpts from novels by Johanna Sinisalo and Leena Krohn. Sf Signal lists the table of contents in its impressive entirety.

Many of these stories are distinctly Finnish in tone (they could well be categorised as ‘Finnish Weird’), and besides that they are very good as stories by themselves, so I can warmly recommend them if you want to get a picture of what the Finnish fantastic fiction field at its best looks like. You can get the ebook anthology at your friendly neighbourhood ebook store.

*) I’m afraid I have no small part of the blame for the delays.

at December 16, 2013 No comments:
Email ThisBlogThis!Share to TwitterShare to FacebookShare to Pinterest
Labels: finnish sf

Last weekend, Shimo Suntila’s book, Sata kummaa kertomusta (“A Hundred Strange Stories”), was published. It’s a collection of one hundred drabbles (short stories of exactly a hundred words), and the material was collected from Shimo’s drabble project last year, when he wrote and published a drabble every single day of the year. 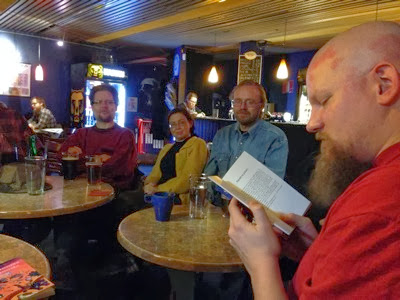 On Friday, there was a head start at the Turku monthly pub meeting where Shimo read a few of the stories.

The official launch party took place on Saturday, first at Shimo’s house (which was packed), and later at the pub Proffan kellari, where drinks were had and more drabbles were read (in the picture the person doing the reading is Tuomas Saloranta, the publisher). 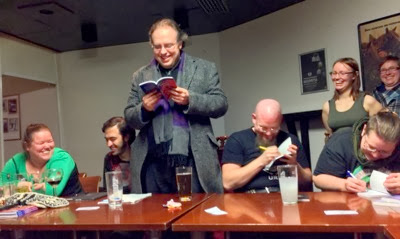 The collection has been a success; I understand there aren’t many copies of the first printing left, and a second one is on the way. The good news is the collection is also available as an ebook, and until the end of the week you can download the book free of charge at the Aavetaajuus webstore. So go take a look!