On Saturday, findom activists once again gathered in Tampere for the annual co-operation meeting to see friends and plan fannish activities for the next year. 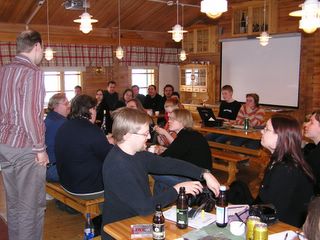 The meeting was held for the third time in the sauna cabin of Tampereen talviuimarit (“Tampere winterswimmers”). A very nice place by the lakeside just outside the center of Tampere.

These meetings usually aren’t very long or bureaucratic, and follow a certain pattern. Everybody tells briefly what they’ve been doing and what they are planning for the year. We also discuss some projecs that involve fen from more than one city, such as Finncons (the next one is 2006 in Helsinki), talk about dates for events (like the Roadside Picnic on the summer), and so on. This time, we also did some planning for the Finnish room party at Interaction. Most importantly, we found a coordinator for the project (go Saija) and funding for the space (go HSFS), so things look good. 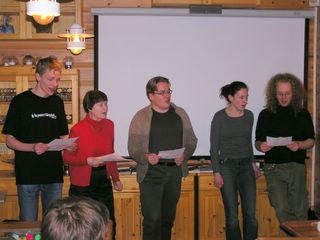 After the official meeting, there was some entertainment (filking and—how should I put it—an extremely fannish fantasy movie by the Smial Morel of Tampere). And of course, drinking beer with friends. 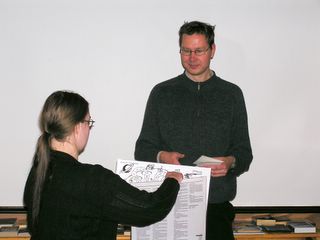 The organizing group, Spektre, celebrated their 42-month-anniversary and were given some appropriate gifts, accordingly. 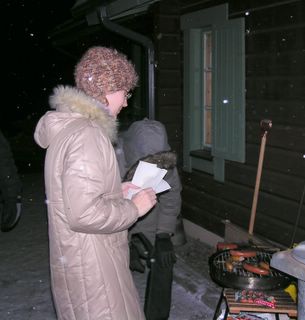 It was really cold outside, but what would the gathering be without some grilled sausages (shown here) or a good cigar with Jukkahoo (not shown here, obviously), even if you may end up losing a toe or two to frostbite? 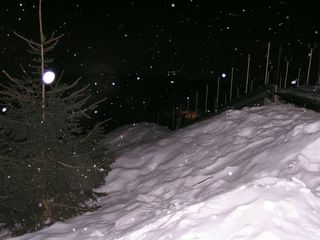 The descent into Moria… or in this case, the big hole in the ice (hence the “winterswimmers”). 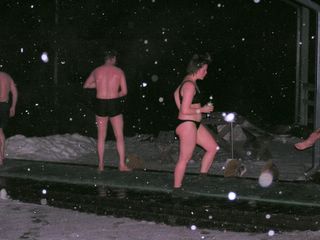 Even with the extremely hot sauna, you’d have to be a bit crazy to go swimming in the almost frozen water. (I’ve tried, so I know what I’m talking about. It’s an experience of a lifetime—at least in the sense that once in a lifetime is definitely enough.) Then again, fandom never has had a shortage of people who are a bit crazy.

Anyway, a productive “mini-smofcon” and a fun relaxcon in one package. Thank you, Spektre!
at February 27, 2005 No comments:
Email ThisBlogThis!Share to TwitterShare to FacebookShare to Pinterest

Yesterday’s Aamuset has an article about Turku fandom’s Leila Paananen. It’s about her writing and, of course, the Portti short story competition and her winning story, Häivähdys sitruunaa. So, when can we expect the novel mentioned in the article…?

PS If you happen to be reading this, and are in the Turku region, the pub meetings mentioned are not only for members of TSFS, as one could understand from the article, but everyone is welcome.

at February 10, 2005 No comments:
Email ThisBlogThis!Share to TwitterShare to FacebookShare to Pinterest

There was a new attendance record in today’s mafia: 18 persons were present, among them some really old faces not seen in fandom in a while. (If you happen to read this, that wasn’t a comment on your current appearance…)

The mafia meetings are gradually getting an identity of their own. The latest issue of Spin was on display today (140 pages, yay!), and the attendees were given a copy of Tutka’s 10-year-anniversary publication. Also, there was bookcrossing and a fanzine made especially for the occasion (Turu Mafia Zine—don’t tell me there aren’t any fanzines in Finland any more…).

These gatherings are also very handy for organizing things with people you don’t usually see—at least all at once. In this case, giving out the books we ordered together to all participants. And arranging rides to the Finnish sf societies’ co-operation meeting (the national smofcon of sorts).

PS A piece of unrelated news: last Friday, there was a PhD dissertation defence about Finnish trolls in Åbo Akademi. To be more exact, Camilla Asplund Ingemark has researched the world of trolls according to the beliefs in the folklore of Swedish-speaking Finns. Helsingin Sanomat has more on the subject. And Enhörningen, of course.
at February 03, 2005 2 comments:
Email ThisBlogThis!Share to TwitterShare to FacebookShare to Pinterest
Newer Posts Older Posts Home
Subscribe to: Posts (Atom)