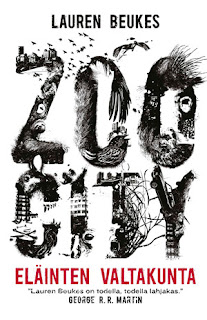 The Helsinki Science Fiction Society has announced the winner of this year’s Tähtivaeltaja Award: the best science fiction book published in Finnish in 2016 is Zoo City – Eläinten valtakunta by Lauren Beukes. The novel is translated by Tytti Vitikainen and published by Aula & Co.

The award jury says Zoo City is a strong and unique science fiction novel, a detective story in an imaginative setting, with a story about xenophobia and commercialization. The polarized society is skilfully constructed and seamlessly joins together reality and fiction. The characters are varied, have many aspects and flaws to their personalities, and have their own motivations. There are no absolutely good or bad characters, only people trying to survive in their own ways.

The intriguing idea of animal familiars combines different mythologies, binds the book together, and brings forth themes of redemption, regret, and adaptation. The book also handles serious topics such as problems and conflicts in society. Beukes tells the story in her own, strong voice, with language that reels you in and keeps you turning the pages. Zoo City offers a refreshing alternative to the Anglo American culture that is prevalent in science fiction.

at June 01, 2017
Email ThisBlogThis!Share to TwitterShare to FacebookShare to Pinterest
Labels: awards