Back from Finncon. (Although I’m sure the dead dog party is still going strong as I type this.)

Sunday started (for me, anyway) with an excellent discussion about the definitions of the fantastic. Smart and interesting commentary that flowed very well. This I would have listened to for a longer period.

In addition to the panel, I saw Charles Vess and Petri Hiltunen show and tell about their works and interests (interesting), part of the definitive war panel (a bit formulaic, as the definitive panels tend to be nowadays) plus the fandom quiz by Jukkahoo (funny and arbitrarily judged, as always, although the competition might be just a little unfair when the questions are about events some participated in, while some others hadn’t even been born yet). 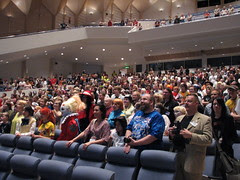 The closing ceremony started with awards for some competition, for people who mainly weren’t present. And then they had some anime awards. I’ve probably said this before, but I don’t think awards belong to the closing ceremony, but should be a separate item instead. But anyway, final words were said, the K-9 (who evolved from a cow in a year) was passed on to the next year’s chairs, the committee, guests, and other participants got their (well deserved) thank yous, and then it was time to go home. 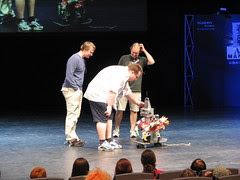 So, the first Finncon in Tampere is over. We’ve had the event in a whole new city, by a whole new crew (or many new people anyway). That is great, I think, and I hope we’ll see another Finncon in Tampere someday. The con newszine mentioned 5 000 visitors on Saturday, so the total amount of attendees should be somewhat higher than that (but probably not by very much).

The venue worked reasonably well (if only—as I said yesterday—because the weather was nice and a lot of the anime people spent their convention outside). I heard there were a few technical glitches and some crowded moments, but I managed to avoid those. As long as you didn’t go to the “anime end” of the building, there was enough space to move around. The sf societies’ tables and vendor space were better than in the previous two years—you could actually approach them and see people—but there still was a problem of them being in a crowded hallway.

But even if the crowding issue wasn’t as bad as it has been the previous couple of years, the appearance of the event was still badly disproportionate and the place still felt too much like you were at an anime event that contained these little spaces of science fiction inside it (the programming rooms), and it wasn’t easy to connect with friends among that many people.

The programming ran nicely on time and the programming spaces seemed to be tended to well, but personally I thought the content of the programming was somewhat light and general—much of it felt a bit introductory. (Of course I’m judging largely by the items’ descriptions on the program book, so I might be wrong here.)

But all in all, I had a good time. Talked to old friends, made new ones (hi Val & Mike!), and was entertained by the programming. A big thank you to all the organizers, you did a huge job, and the Tampere Hall is still standing. (I hope all of you are too.)

hello from my olpc xo in tampere, precariously using a tenuous wireless like rabbit ears! Was a pleasure to hang out with you and all the Turku crew, all of your friendliness and kindness are appreciated. wish we were staying there longer! But we do have two extra days after Assembly . . . oh and Mike was amused by the kitsch at Hook but asks me to report that their 'suicide' sauce is "wimpy spicy" (: although the food is still delicious. as for that fantastic panel, I could have listened to them for a good two hours more...and I shudder to think how anyone would have breathedin Tampere-talo if it rained...Huomiseen!

I really liked the place on the third floor with the 18 year age limit. And it seemed that a lot of people you wanted to meet passed there...

While you probably had a nice dinner in Turku on Monday evening we had a boring dinner near the Silja ferry terminal. Since some people spent so long time at the Lenin museum we arrived a bit late to Turku so we did not have time to find a good restaurant.

@Tommy: I went by the bar, but it didn't seem to be in use -- it was probably too early and then I forgot to revisit. Sounds exactly what I was looking for…

Sorry about your dinner. We had a wonderful time. :-)